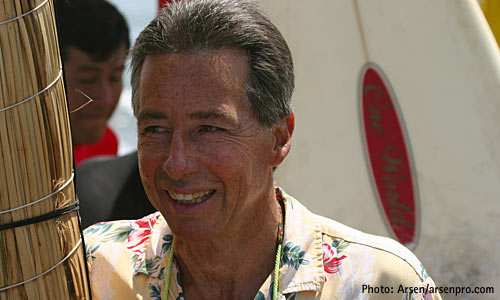 I was very blessed to have surfed with Felipe Pomar, the 1965 World Surfing Champion back in the mid 1960’s -early 70’s in Hawaii.  We still both surf today.   Felipe Pomar – World Champion Tsunami Rider Felipe Pomar set the bar early for Latin American surfers by winning the 1965 World Championships in his mother land of Lima, Peru. His unorthodox yet gutsy approach to surfing the tricky peaks at Punta Rocas earned him the win over some of the world’s greatest wave riders.  Felipe won World Championship over some of the world’s greatest wave riders. Mike Doyle, Fred Hemmings, Mickey Munoz, Paul Strauch, Midget Farrelly, and Nat Young were among his conquests en route to the historic win.

General consensus agreed that Pomar’s local knowledge and his calculating approach enabled him to make sense of the shifting peaks and consequently make the most of the waves he rode. At the final horn, it was Felipe Pomar, fresh from 18 months of training in Hawaii, who became Latin America’s first surfing world champion.

Felipe Pomar is widely credited as being one of the few surfers ever to ride a tsunami. This bizarre event occurred while surfing with his longtime friend, Pitti Block, on a small island off the coast of Peru.  After an earthquake rocked the area, Pomar and Pitti were sucked out to sea and subsequently caught two large swells, successfully riding them toward shore.

www.worldchampionsofsurfing.com/felipe-pomar-gallery/  Great photo’s for you to enjoy here.

This week in Huanchaco, Peru the local and international communities came together on Friday and Saturday to commemorate and celebrate Huanchaco as a World Surfing Reserve, the first World Surfing Reserve in Latin America. In a series of dedication events that saw everything from cultural re-enactments, fireworks, and attendance by Peru’s surfing elite – the importance of this designation for the local community and Peruvian surfing community was center stage.

Felipe Pomar, the 1965 World Surfing Champion, who continues to be a prominent ambassador and elder statesman for Peruvian surfing culture, said, “It was an honor and a great pleasure for me to be present at the dedication of the Huanchaco World Surfing Reserve.

Thanks to the initiative of Save The Waves Coalition, surfers in Peru and throughout the world can be assured that this ancient cradle of surf culture will be recognized, protected and preserved. My heartfelt thanks to Save The Waves, National Surfing Reserves Australia, Thor Heyerdahl, Duke Kahanamoku, Carlos Dogny, and all the great surfers who have made this possible. I call on surfers everywhere to get organized and work to save our waves.”

Most impressive is Huanchaco’s strong ocean heritage, which spans over 3,000 years. The strong ocean culture of Huanchaco is credited with being the birthplace of Peru’s “caballito de totora” –one of humanity’s earliest known surf crafts used to ply the waves for both work and pleasure. Caballitos de totora are still an integral part of the local community, both for fishing and recreation.

The heralded Huanchaco surf zone joins just four other sites to claim such status—Malibu in California, Ericeira in Portugal, Manly Beach in Australia, and Santa Cruz in California.

On Friday night, the community came together to kick off the weekend’s festivities with a traditional caballito de totora paddle out, fireworks, and live traditional music.  The official dedication day took place on Saturday and culminated in an inspiring cultural reenactment, traditional dances, the introduction of the Huanchaco

“It is amazing to see how much pride the community has in their waves, their culture, their coast and now their World Surfing Reserve. It is very inspiring to be a part of,” said Save The Waves Executive Director, Nik Strong-Cvetich.

During the Saturday event the members of the Local Stewardship Council signed a stewardship plan that they co-drafted with Save The Waves Coalition to guide the management of the newly established Reserve. The plan includes how the group will address coastal threats that may face Huanchaco, how they will continue to educate others about the tremendous value of surfing resources, and how they will continue to inspire stewardship for the area.

“This dedication and the signing of the document represents the culmination of many months of hard work”, said Nick Mucha, Environmental and Programs Director for Save The Waves, “ However, this is just the beginning, and the real challenge is the continued protection of this amazing coast and culture.”

This is wonderful for our Ocean and waves, but Please everyone don’t forget to do what you can each time you go to the beach where

you are and take duty of care of our beautiful Ocean.  We need to work together as The nightmare of Fukushima has only worsened, and it will take an international coalition and direct, focused action to fully resolve this crisis, or it will only expand and create more problems. www.surfingreserves.org